The awesome wombat facts that will make you a mega-fan of this marsupial!

What poops cubes, has ever-growing teeth and can almost run as fast as Usain Bolt? The Wombat!! Today we share 10 incredible Wombat (Lasiorhinus latifrons) facts…

1.They Poop In Cubes

One of the more unusual facts about wombats is that their poo resembles an 80s toy craze rather than actual animal faeces. No joke: these critters actually excrete cube shaped poop!

Apparently this stops the poo from rolling off their marked territory of rocks or trees. Glad we got to the bottom of that…

2. Their Butt Is Their Main Form Of Defence

♫ They’ve got big butts and they cannot lie, those predators can’t deny. That when a wombat burrows down into the ground with a round thing in your face you get crushed ♫

MC Hammer jokes aside, the wombats rear end is really their main form of defence against predators. When a predator is near, these big booty mammals dive down their burrows and block off the entrance with their butts. As their booties mainly consist of cartilage, they are very resistant to scratches and bites.

They can also crush predator’s skulls with their behinds. Crazy stuff.

3. Their Closest Relative Will Surprise You

Although Koalas could be physically compared to bears, pigs and guinea pigs, the closest living relative to the Wombat is actually the Koala. Although they may not look physically similar, both species have backward-facing pouches. This is especially useful for Wombats as they won’t get dirt in their pouches while digging. 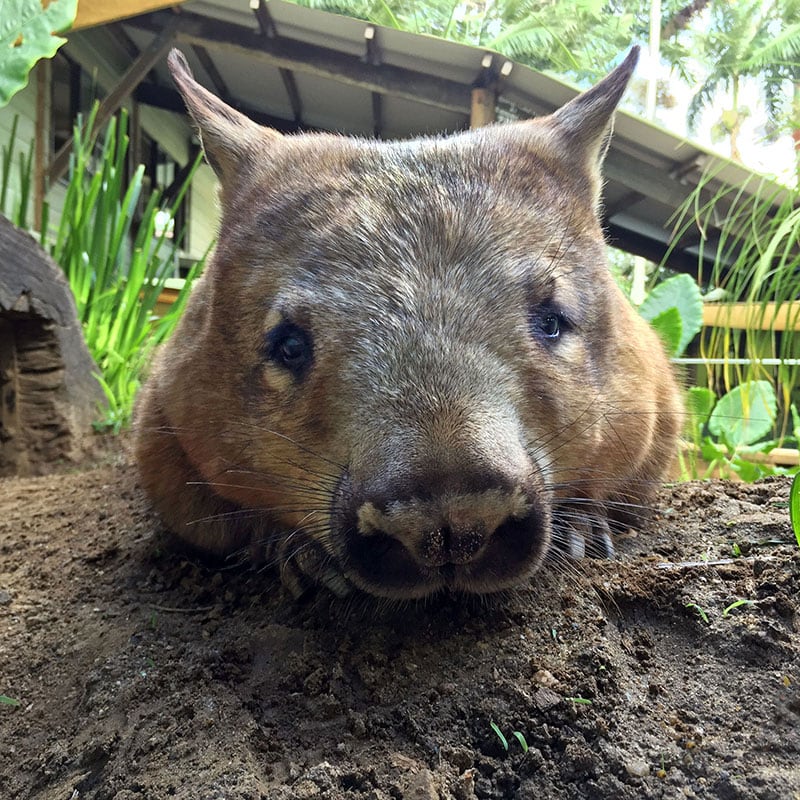 4.There Are Actually Three Sub-species Of Wombat

5. A Group of Wombats is Known As a Wisdom

A wisdom of wombats. A mob of kangaroos. A paddle of platypus. We can’t get enough of Australian animal collective nouns!

6. The Heaviest Wombat Was 38kg

The oldest (31 years) and heaviest wombat was Patrick the Bare-nosed Wombat who lived at Ballarat Wildlife Park. This makes him the weight of around four Koalas combined.

7. They Can Run As Fast As A Human

Don’t let their looks deceive you, these marsupials can run at speeds of 40 km/h! That’s just 7 km/h slower than Usain Bolt!

Next time you complain about your wisdom teeth coming through, spare a thought for the Wombat! Their teeth never stop growing, which ensures they don’t grind away when they are munching on grasses, roots, shrubs and vegetables.

9. Their Guts Can Hold Food For 70 Hours

And it takes them around four to six days to digest a meal.

10. They Are The Second Largest of All Marsupials

The largest living marsupial is the Red Kangaroo. However, the largest ever marsupial was a Diprotodon, which was a wombat-like creature standing at around 2 metres tall. Yikes!

During the day, this big beauty can be seen getting her beauty sleep through a glass window that looks into her burrow.

Book Rainforestation to see a Wombat in Cairns today!